Part 4 of Jack and Emily's journey of sexual renewal. Catch up at:-

Since the birth of their last child, Jack's wife, Emily, could barely manage a fortnightly 'date night' with pretty simple vanilla sex. It was she who suggested Jack start sperm donation as a way to get some profitable relief of his sexual tension.

But as the children grew, Emily was getting more sleep and the youngest was going to kinder, Emily started to have time for herself. She also started feeling dissatisfied with their fortnightly date-nights, which she started to realise were rather vanilla, kissing, cuddling, Jack jumps on and does his thing and they roll over to sleep in barely 10 minutes. Emily felt there should be more, but she wasn't quite sure what 'more' should be.

In hind sight, in their entire married life, their sex had always been vanilla. She had heard about women having amazing body shaking orgasms, but although she had had some orgasms in their 10 years married, she couldn't say they were mind blowing, earth moving orgasms. She felt embarrassed to talk to Jack about it - she loved him and didn't want him to feel she was criticizing him. So she turned to her BFF Teressa with whom she could talk about anything. Teressa was a few years older and more worldly. When Emily told her about her feelings of missing something in her life, Teressa confessed the she and her husband had gone through a similar dry patch and had consulted a sex relationship counselor with great results.

So Emily wrote down the counselor's name and number and rang and made an appointment. It was a Wednesday afternoon, and when Emily arrived, the sign on the door read "Ms Sondra Baiseur, Registered Sexologist and Counselor". She went in and introduced herself to the receptionist, who said "Ms Baiseur is waiting for you" and showed Emily straight in.

Ms Baiseur was an attractive woman only a couple of years older than Emily. She shook Emily's hand and said "Just call me Sandra or Sandy. Baiseur is my French husband's name and most people can't pronounce it".

Seeing as it was late afternoon, Sandra offered Emily a glass of wine to help her relax and poured a glass for herself also. After some introductory chit-chat and mention of Teressa's recommendation, Emily started to relax and pour out her issues about her vanilla sex life.

Finally, Sandra interrupted Emily at a suitable point and explained that she really preferred to talk to couples together. "Sexual pleasure isn't just about penis in vagina, or a husband and wife having a bit of ruppy pumpy in bed. Think of 'intercourse' as social communication and interaction between various people. And 'sexual intercourse' just extends that interaction to include communication and interaction with a sexually arousing aspect. I could give you books or videos, but this is something that is best learned together and from and with others on the same path."

"Look, I've got a small social get-together 'class' at my house tonight. Why don't you and your husband come along. It will give you a chance to talk with other couples that are dealing with similar sexual growth issues as your selves. Now it is a 'free' night so you might see people enjoying different sorts of play-time together. Some people call it 'swinging' or a 'sex club', but I prefer to simply say it is a class or party where adults can interact, relax and feel free to learn about and explore adult issues and enjoy new experiences. There will be people at all different stages, from those starting out like you, those discovering new aspects of sexuality for the first time, to those that are quite liberated. Listen, talk and watch. Please don't feel pressured to join in. You are sophomores in this school of sexual pleasures." Emily called Jack at work to tell him about their invitation and he promised to get home early. 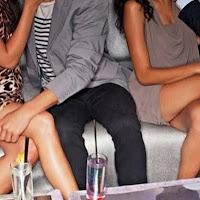 Arriving at Sandra's house, there is a sign next to the door, "Recontrer les Biaseurs". The door is answered by a very handsome man "Bienvenue chez les Baiseurs. Je m'appelle Pierre!" The party is already underway. They were a little surprised to see the crowd were very ordinary looking people, many a bit older than Emily and Jack. These weren't the sort of people Emily expected to see at a 'sex' party. Sandra came over to greet them, and surprised, said "Well hello Jack. So you're the lucky man married to Emily. Emily, you wouldn't have credited it, but I went to school with Jack". She led them into the lounge and introduced them to another newbie couple and signaled to a young girl acting as waitress, to bring them drinks.

Emily was into her 2nd drink and starting to feel relaxed and comfortable. Jack had wandered off and Sandy came over, stroked her arm, then caressed her hair and neck, and coming in intimately close, said "Are you enjoying yourself? Are you getting the feeling of opening up to new experiences? Let me show you around". Sandy put her arm around her and Emily noticed her large soft breasts, unencumbered by a bra, pressing into her as they walk around.

For the first time, Emily notices one group of four playing cards, but from their stages of undress, she realises they were playing 'strip poker'. She notices Jack to one side leaning in very close to another woman in a see-through red-lacy dress. Sandy said, "I see Jack has found another old school friend, Jacqueline".

Sandy guided Emily down a corridor past some bed-rooms. A naked couple were on a bed with the woman kneeling between his legs sucking his cock. Her arse was in the air facing the door with a pretty 'chatte rose' gaping for voyeurs to see. Sandy walked in with Emily still in hand, and said "Emily, this is Jane and Bill. Having a good time you two?"

Sandy knelt behind Jane and leaned in to lick her already wet pussy. Emily was fascinated. She had read about women together but had never seen it up close. With one hand on Sandy's back and her other on Jane's thigh, she leaned in to observe Sandy's action. Jane was moaning and pushing her vulva back into Sandy's face.

"Do you want to try?" Sandy asked Emily. Feeling a little tipsy now and her original reticence almost dissipated, Emily said, "I'd love to. Nothing ventured, nothing gained!"

Sandy moved her head to one side and with her fingers, spread Jane's labia. She pointed out Jane's clitoris and said to Emily, "The clit is a woman's most sensitive spot. This is what most men get wrong. They think sex is all about them getting their cock in your cunt and having their own orgasm. A woman's arousal starts up here. Here, twirl your tongue lightly around Jane's nub. Now very gently suck. Now start licking up and down her labia, both sides, then across her urethra and lick up to her clit again." Jane is responding again, squirming her vulva against Emily's mouth. Sandy directs, "Now spread your mouth over her vulva whilst licking. Its quite like Deep French Kissing. Now work your mouth and tongue up and down and round and round, coming down to probe your tongue into her cunt". Jane is starting to buck - an orgasm is building up.

Sandra continues her instruction. "Now there is one more very important and very sensitive place in a woman, and that is her 'G-spot'. Here, give me a couple of fingers. Suck them to get them a little wet. Now slide them into Jane's pussy, with their tips facing upward. Oh my God, she is so wet already! Now, can you feel along the inside top of her vagina, a spongy nobbly patch? Now gently caress this spot, curling your fingers in a 'come here' sort of motion."

Jane's thrusting becomes an almighty orgasm and she arches her back in a pelvic thrust, then her whole body starts shuddering. With an "Urg! OOOH my God!", Emily's fingers are suddenly squeezed out and a fountain of liquid sprays across Emily's face.

"I want to learn more and 'grow up'" said Emily.

"Well come with me to the next class-room" says Sandra. "Have fun you two" she says to Bill and Jane. "We've got her warmed up for you Bill. it's time you two took it to the next level".

In the corridor, Sandy and Emily looked around and found one of the five bedrooms empty. Emily's eyes were popping as she saw groups of two, three or four in all sort of positions in 3 other rooms. It was only now that she noticed the heat and wetness in her own panties since being so up close and personal with Jane.

Sandy guided Emily into the vacant room and onto the bed, slipped her own dress off revealing her gorgeous golden orbs and the tiniest black thong, which soon joined the dress on the floor. She knelt on the bed and reached around Emily to unzip her dress. Her beautiful boobs were swaying just centimetres from Emily's face and the musky perfume on them was intoxicating.

Just a couple of hours ago, Emily would have been shocked to have another woman undressing her and about to have sex with her, but she was now swept up into this unreal world of sensuality.

Sandy slid the dress off Emily, unclipped her bra releasing a pair of very nice D cups, gently cupping them in her hands and flicking the nipples with her tongue. It felt like a little electric shock to Emily and she could swear they hardened and popped up. Sandy slid her hands down Emily's thighs  taking her knickers off. Emily felt a little embarrassed now that she had only worn very plain knickers and bra instead of something sexy.

Sandy climbed onto the bed, lying with her legs up beside Emily. "Now you lie on me and come down and practice what you learned on Jane, on me. This is what is called 'soizant neuf' or '69'". As Emily tentatively went down on Sandy, Sandy was pulling Emily's leg over herself and burying her face into Emily's pussy. Lifting her off for a minute, Sandy said, "It's important that you learn to enjoy this yourself, because then you are better prepared to satisfy a partner". "A female partner?" thought Emily and the image of Teressa flashed across her mind. "OMG" thought Emily as her own cunt was flooding and the initial tingling of her clit built and she pushed her vulva up for Sandy to eat, just as Sandy her-self was thrusting up into Emily's face.

"So this is what Sandy meant when she said that good sex is so much more than just a penis and vagina" thought Emily.

After 2 or 3 orgasms each, there is a tap on the door and there is Jack and Jaqueline. "Do you mind if we join you" says Jack. "This looks like the graduation class".

Well we needn't go into all the details of their 'menage a quatre', suffice to say that every combination of cock, cunt and mouth were explored.

But Jack and Emily just never seemed to find the time. Sandy had unleashed a cougar and Emily was jumping Jack morning and night, ensuring she got her share of her own orgasms before jumping Jack's cock. No more vanilla 'date night' once a fortnight.

Consequently, Jack gave up sperm donation - he was always too drained. But Jacky was invited to join Sandy and Pierre in the sex education 'classes' once a fortnight.

Vanilla is definitely 'off the menu'!