The Inseminatorium and some Dodgy Business

In the previous post, we met Jacqueline, who worked at the 'Assisted Conception' clinic, where she met Jack, an old school hottie, who had come to the clinic to make a sperm donation, with which Jacky gave him a hand.

Content Warning:- This posts touches on the delicate subjects of infertility, artificial insemination and disabled partners. Perhaps you might like to read my personal post-script first.

Now Jacqueline's job dealt with sperm donors less than 20% of her time. Most of her time was dealing with the emotional job of talking with women (and husbands at times) who had often been trying to start a family for years, but with no success. Sometimes it was due to the husband's infertility, and other times the husband had sustained a severe disability.

The other hard part of her job was due to her boss, Dr. Hardcastle. He just didn't have any empathy for his patients. His artificial insemination of the women was about as empathetic as a mechanic changing a car's oil. And the women often complained to Jacqueline. As if the stirrups and the cold speculum weren't bad enough, Dr. H's involvement in the implantation was barely 30 seconds. Even the worst dicks that Jacky had ever encountered, lasted more that 30 seconds. 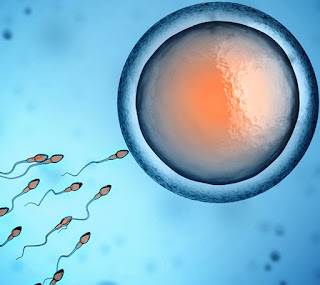 Once Jack's profile went on file, Jacky got quite a few expressions of interest from female clients. Now one client was Jacky's friend Helen, who both loved Jack's genetic profile and hated Dr. H's attitude. Now Helen was a bit of a free spirit like Jacky, but her husband, a returned veteran, was a paraplegic, paralyzed from the waist down. One late Friday afternoon after Jack's regular 'donation', Jacky had a sudden dirty idea. "I wonder if Helen and Jack would be interested in a 'natural'  donation?". She rang both Helen and Jack and put the idea to them and both were interested. Jacky knew that she was breaking company privacy policy and was in fact taking business away from Dr. H. But Jacky was sick and tired of his attitude to patients and staff.

So having checked Helen's cycle and fertility dates, a late Friday afternoon appointment for both Helen and Jack was made. Dr. H. and the other staff had already left. Jacky took Helen and her wheelchair bound husband down the corridor, past the Masterbatorium, round the corner to the Inseminatorium*. Jacky understood what the ladies hated about the cold, clinical Inseminatorium, so she had prepared the room ahead of time. The fluorescent lights were off and lighted candles were placed around the room. The surgical bed was made up with soft comfortable blankets and the stirrups were wrapped in soft pink padding. A bottle of wine and glasses were beside the bed.

Jacky showed Helen and her husband into the room and poured them a glass of wine each. They thanked her for the effort she had put into preparing the room for them. Jacky got out a couple of Venetian style decorative masks for them to wear and explained that their donor would also wear a similar mask for privacy. Helen undressed and positioned herself on the bed with feet in the stirrups and Jacky wheeled her husband around so that he could lean forward sufficiently to arouse Helen orally and digitally. Jacky left them with some lube as well to prepare for the donation.

Jacky went out and fetched Jack from the other waiting room and took him into the Masterbatorium, where they both stripped and Jacky had her way with Jack to get him aroused and edging whilst she got herself off as well. Once Jack was well and truly ready, she opened the rear door of the Masterbatorium which lead directly into the Inseminartorium. Jack went in first, lead by his raging erection, and Jacky followed, now with a loose surgical gown wrapped around her nakedness.

"Oooh. Lovely" said Helen when she saw what Jack had to offer. Her husband was sitting beside her holding her hand. Jack went over and shook his hand and Helen reached out and stroked his cock. Her husband nodded to Helen indicating his approval. Jack assumed the position between her legs. Helen stimulated her clit - the rules were that Jack would not touch her in any way other than by fucking. Helen was already well lubricated and Jack slid right in. Helen lifted her thighs and responded to his thrusts.

Jacky explained to Helen that she needed to remain with her legs up for 20-30 minutes to maximize the chances of insemination. She then went back into the Masterbatorium to Jack. Despite his donation, he still had a usable erection which Jacky wasn't going to let go to waste, so she pushed him back onto the lounge and straddled him. As Jack massaged her breasts and tweaked her erect pink nipples, Jacky fingered herself so that together with Jack's not quite flagging erection, she achieved two more orgasms. Jacky finally climbed off, licked Jack clean, got fully dressed and returned to Helen to help them prepare to go home.

And so it was that "Jack and Jacky's Natural Service" business was born, even if somewhat dodgy and 'off the books'.

Meanwhile, back at home, Emily was happy that Jack seemed much more contented, and she was satisfied with their fortnightly date nights. When he gave her a beautiful diamond Eternity ring, she was over the moon, though she was a little surprised that Jack made so much money from some simple sperm donations.

Note:- *Inseminatorium - Having started with the word Masterbatorium, then the idea of an 'Assisted Conception' clinic, it was an obvious(?) step to have an 'Inseminatorium'.

Whilst this post is fictional and a bit of fun, the subject matter touched on is very real. Personally, I have a disabled partner with zero libido, since an acquired brain injury from a childhood accident, although it took us 30 years to finally understand the source of her issues. For us, the issue of starting a family was not infertility, but rather the very real danger of conception, pregnancy and child raising, due to her medication and dangerous medical condition. Under medical supervision, after a lot of soul-searching, we finally took the serious step of reducing her medication by half, then using the Billings Method for fast conception - once a month whether she enjoyed it or not, for three months. Child raising was difficult with breast feeding out of the question, and nursing, carrying and bathing baby could never be unattended. We were fortunate in that our baby's congenital issues could be addressed surgically, although her last surgery was at age 26 (a heart valve replacement). So I fully understand why some couples resort to AI or surrogacy.