"WTF are you talking about Thomas? A 'Clitoral Erection'? Guys have erections - we all know about that and seen them. But a 'clit' is just the size of a pea, isn't it? How can a clit have an 'erection'?" 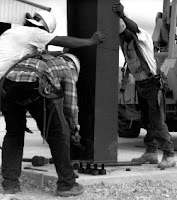 A Good Erection requires Perfect Alignment
of the Nuts and Bolts. ©tmurphyphotos

Some Anatomical Facts of Embryonic Development

Anatomical Ability of a Clitoral Erection

So you can see that the female anatomy has an analogous internal structure to the penis, and thus is capable of an equivalent 'erection', even though shorter (average about 4"/10cm) than the average penis. Sure, the word 'erection' implies a structure arising (externally). So whilst the female cavernosa fill with blood and swell and harden like a penis, it is all internal, so technically not an 'erection' by the strictest definition of the word. 'HealthLine' has a good recent article on the subject, "14 Things to Know About Clitoral Erections".

The head of the clit, it's glans, can swell and harden. The vulva swells slightly and the labia (lips) become full. The inner labia (minora) push out through the outer labia (majora). The labia become flushed (vive la chatte rouge). Some have described it as looking like a flower blossom opening. The bottom end of the labia spread the vaginal opening. Some have described it like the labia are whispering "Avanti! (Come in!)".

The Female Perspective - Some Questions

I won't presume to write about something that I've only observed a couple of times, and I'm relying on anecdotal descriptions and the little there is in the literature. But what I would really like is to get some feedback from my female readers (use the comments or write your own blog response). Are you aware of the ability of your clitoris to have an erectile type response? Apart from the outward visible engorgement/swelling of the clitoral head/glans, have you experienced full vulva engorgement, including 'blossoming' of the labia and 'gaping' vagina? Does arousal of your G-spot send feelings up the full length of your clitoral structure?

The Epidemic of (Sexually) Uneducated Males

Even medical web-sites like 'Healthline - Human Body Systems' describe the penis in detail under "Reproductive System (Male)", but "Reproductive System (Female)" only discusses the vagina (and uterus and Fallopian tubes); the vulva and clitoris are totally ignored. As long as sexual education only focuses on reproduction and not on sexual arousal, will the 'orgasm gap' continue!

The "orgasm gap" is well known, but the truth of the cause is not well understood. Men complain about their wives losing interest is sex, as if it's the wife's fault, when in fact it is the male's fault in that he never learned to arouse his wife, to give her any clitoral erections and orgasms. So often women have to satisfy themselves. Is it any wonder that some women turn to other female company, either 'bi' or lesbian, because a woman knows how another woman can be aroused - "Why can't a man love more like a woman?"

If only men were taught that women have an organ just like their penis and can have 'erections' just like them. Men need to learn to watch and learn from how women arouse themselves, massaging their clitoris head and their labia and vulva. Of course, another person can arouse in a way that a woman alone can't - the tongue!

NOTE TO ALL MEN - a women's sexual centre is NOT the vagina. From their teens, men learn that sex is all about their penis, its erection and orgasm, then when they start fucking women, it is still about their penis ejaculating into a vagina.

One work-around is 'outercourse' where his penis and her vulva rub against and arouse each other. But in typical male fashion, he knows it as a "pussy slide", something that the woman does to him to arouse him. It was only recently that I read a woman's take, calling it a penis massaging her vulva. Perhaps its all about who's on top, "in the drivers seat"! (Of course the penis can be replaced with another vulva for intimate massaging.)

From this position, once both have been equally aroused, and her 'erection' is calling "Avanti", then it is a simple slide into coitus.

Good Sex is a Shared Experience - She Comes First

The number one rule of good sex is that he delays his gratification, focusing on her arousal with extended fore-play, until "She comes first!".