(Prelude:- A fellow punter had reported visiting D and taking as a gift, a novelty Nun's habit.  On a subsequent visit, talking with D, I mentioned the outfit - she said she had taken it home intending to wear it to a B&S Ball, but ended up not going.  The following relates to a further subsequent visit...)

Fr Thomas had taken time off from tending his flock to pay a visit on Sr. Delilah. She was delighted to see him and welcomed him with a sisterly kiss.

When she came into the inner sanctum, she was wearing her new habit.  Fr. Thomas turned her around to admire her attire.  But to his shock and horror, he discovered she was wearing a pair of those disgusting, red 'g-string' thingies. Not only that, but they were wet and slippery to the touch.

He reprimanded her severely, laying her over his knees to apply a spanking to the exposed cheeks (that the g-string failed to cover).  He ordered her on to her knees and directed her to kiss his knob in penitence. 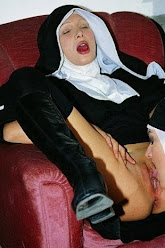 After her slobbering penitence, he ordered her to her feet where he defrocked her, then lay her across the bed so that the dreadful object of offence could be ripped off of her.  He then gave a kiss of forgiveness and applied the salve of reconciliation, laving the offended parts of her body, till she shuddered in penitence.

He then turned her over on to her knees again so that they could be joined in holy union.  With much pleading to The Almighty, they ascended the heights of ecstatic utterance, till at last they exploded in unison with a three fold "Oh God!". (Note that a 3-fold "Oh God" carries higher merit that a 7-fold "Hail Mary").

As Fr. Thomas performed his holy water ablutions, he could not help but admire the perfectly angelic creation of Sr. Delilah, and wondered if she had any other "bad habits" that might need his attention.

(As usual, apart from some literary license, no facts were harmed in the production of this review!)